An experienced mechanic understands the importance of finding the best OBD2 scanner to complete the job.

That’s why it’s essential to thoroughly investigate each model you are considering to determine if it will fit your needs.

Today, we are going to look at the similarities and differences between the Autel AL619 vs. Innova 3160 to see which one works best.

While both the Autel AL619 and Innova 3160 offer plenty of benefits to professionals and amateurs alike, we have to choose the Autel AL619 as the best code scanner among the two. The price is significantly lower than the Innova unit and it doesn’t lack that many features. Furthermore, the Innova scanner doesn’t feature a color screen which makes visibility slightly difficult. Not only is this basic OBD2 scanner simple to use, but it’s comfortable to hold as well. This Autel AL619 features a 3.2-inch screen size which offers plenty of visibility. It’s capable of reading the Check Engine Light, ABS and SRS, but not ESP. You can freeze frame the data with this system and it features a complete code library for reference.

With that said, there are some things this unit isn’t capable of. First of all, it doesn’t feature either Bluetooth or Wi-Fi. Furthermore, it doesn’t read OBD1 codes and you can’t export the data to your PC. Still, for the price, there’s not much more you could ask for out of this code scanner.

It is compatible with most 1996 or newer vehicle models. This includes Nissan, Honda, Toyota, Mercedes, BMW, VW, Volvo, Chrysler, Ford and GM. You also gain access to lifetime updates and there are multiple language options for added versatility.

With the Autel AL619 in your hand, it’s simple to troubleshoot and repair most common vehicle issues. We highly recommend this for anyone looking to get started as a mechanic, or for an existing shop that doesn’t require advanced diagnostics. 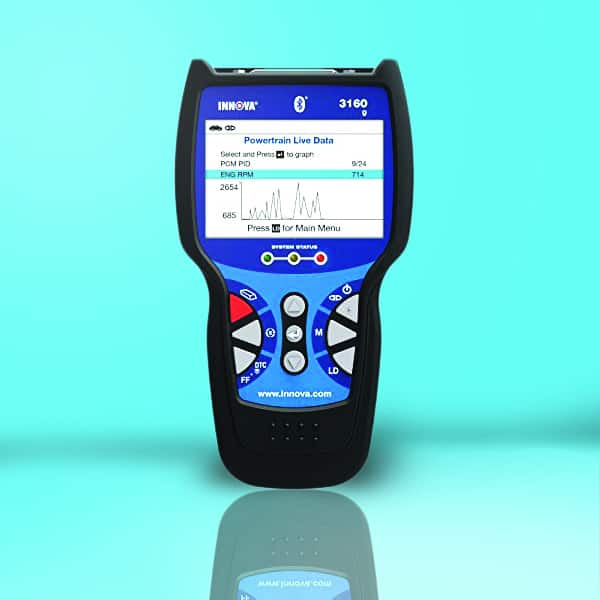 As we move into a discussion about the Innova 3160, the most important aspect to look at is the functionality. This code scanner does diagnose and clear SRS codes. It also removes and diagnoses ABS codes as well as the Check Engine Light. What it’s not capable of is reading ESP codes.

If you need real-time data, you will be thrilled to know that this OBD2 scanner does display and record live data. You can also export the data to your computer. It’s only compatible with OBD2 American, Asian and European model codes on vehicles produced since 1996, but you can add on the OBD1 compatibility with an upgrade.

Now, let’s get to a few of the disappointments. First, it doesn’t come with Bluetooth or Wi-Fi capability. That’s discouraging considering the higher price tag.

Furthermore, this model only features a 3.5-inch black and white screen. To get the color option, you need to upgrade to the Innova 3160g.

Still, some consumers prefer the Innova brand to the Autel scanners. If that’s you, then this model is perfectly acceptable for beginner to intermediate diagnostic scans. If you need something in-depth and with more functionality, you will have to look at one of the more advanced OBD2 scanners instead.

To fully determine which model is best for you, it’s imperative that you examine the key characteristics of the Autel AL619 and Innova 3160.

Both code scanners feature similar abilites. They both read the Check Engine Light, ABS and SRS/airbag. Neither of them scan for ESP codes. The Innova 3160 does offer the option to add OBD1 capability and it allows you to export data to your computer, unlike the Autel model. Still, many beginner mechanics don’t need this capability and find it’s not worth the added expense to them.

You can expect to pay more for the Innova unit. Most people find that there’s not enough additional capability to justify the cost. If you plan to work on older model vehicles, having the option to add OBD1 codes might be beneficial to you. In addition, the added cost gives you the opportunity to transfer data to your PC which could be helpful for some professionals.

While the Autel code scanner features a slightly smaller screen size, it is in color. The 3.5-inch Innova only comes in black and white. There is an updated model 3160g that features the color screen instead. As far as comfort is concerned, both models are lightweight and portable. You won’t notice any fatigue while using either option.

Neither the Autel AL619 nor the Innova 3160 offer the ability to connect via Wi-Fi or Bluetooth. This is to be expected considering both models are on the lower to mid-range scale of code scanners.

Both machines offer Freeze Frame. This is helpful if you need to capture and store the operating conditions of your vehicle’s engine. What’s great about this function is that the information is stored until the associated History DTC is cleared.

This decision isn’t reached solely because it’s a cheaper OBD2 scanner, but mainly because the Innova doesn’t offer enough features to justify the additional cost.

With that said, there might be some people that require the other options provided by the Innova 3160. If that’s the case, then the Autel scanner simply won’t do.

want to consult with a professional?